This article analyzes the differences between a “traditional” startup and a corporate startup, addressing the role of the corporation in their venture.

At Bundl, we often get the question: “What’s a corporate venture?”

Although Bundl is a Venture Development Firm, every once in a while we work with a startup, making sure we keep practicing what we preach. This article is based on the experience accumulated while working with both.

1. The goal behind launching a startup

Why do corporations launch their own startups? It’s rarely only about money. This brings us to the first important difference, the goal of the venture.

If you want to deep dive into this topic, we wrote another article about it, but these are the 4 most prominent drivers for a corporate launch of a venture:

In 2018, we launched a venture project in the digital entertainment business — The Park Playground — with a large Belgian telecom, Telenet. After reviewing the business plan, it became clear that it would be profitable after year 1, making it a very interesting investment. More importantly, it had the potential to be leveraged to an international market with a much broader audience. It would also allow the corporation to explore the implementation of new technologies (in this case, Virtual Reality) in the entertainment sector. If the startup succeeds, they’ll  hold a strong foot in an upcoming segment with a positive brand relationship to the parent corporation. Improved brand image, new market, new technology: triple check.

In a (funded) startup, the investors closely supervise if the company is gaining traction within the given launch period. If it’s unable to prove their assumptions and meet the targets, it’s rarely refunded. But if the goal is reached, the startup moves to a scaling phase with more funding to support its increasing traction. This creates a continuous run and pitch process, no different from those in a corporate venture.

It’s essential to validate key assumptions and gain traction in the market, but a venture is rarely funded for these reasons alone. This leads us back to 1. Goal, but the way CVs are funded is also fundamentally different:

Most of a CV’s funding is internal. The company decides if they want to invest in the startup’s first stage, weighing the benefits of success versus risks and cost. We noticed that many seed-stage CVs have considerably larger budgets than startups at the same level because the ROI is not only financially driven, but it is also a combination of the four drivers mentioned above.

3. The amount of resources available

This is a startup’s greatest limitation and a corporation’s greatest asset. The corporate parent’s brand capital drastically increases the venture runway. They already have the expertise (for example legal, marketing, and finance) and usually strong partnerships to explore. This is huge. Anyone who has tried to launch a startup knows that closing deals and setting up partnerships is important. It’s so much easier to have a large, credible brand behind you.

In one of our first venture projects, we wanted to reach as many globetrotter-profiled people as possible to promote a new app. Our client already had a partnership with a leading online flight booking platform (with more than 1 million followers on Facebook and Twitter). Having the corporate brand behind the venture made it fairly easy to come to a collaboration. Besides their leverage in meetings, this corporation also had people available to help solve problems in legal and marketing.

A CV is usually held “incognito” for the initial launch. There won’t be a link to the parent brand until it shows value, mainly to avoid brand damage.

If it’s successful, the CV will rebrand to fit the parent company’s portfolio or kept as a separate entity to go its own way. These are dilemmas that will never cross a startup founder’s mind but are already solved by the corporation before the venture is even launched.

Besides that, corporations usually already have strong distribution and marketing channels. Think newsletters, social media, partners, and distributors: an essential playground to experiment with product and market fits before investing heavily in a product. For a startup, building these sales and marketing channels can take a lot more time and money.

In 2017, we started a project with Van Hoecke. They’ve been selling through distribution partners (B2B2C) for almost 40 years, and one of their product lines – Orgalux – wasn’t getting enough traction (the distribution partners put energy in what sold best, not in what Van Hoecke wanted to sell most). So they chose a different route: Go straight to the end consumer using ecommerce and create more brand awareness in the process. Going B2C increases the product sales while cutting out the middlemen and increasing profit. More importantly, more people will be aware of the product and ask the distribution partners about it, increasing the sales numbers in B2B too.

5. The influence of corporate politics

While startups usually aim to please two stakeholders, the customers and the funders, a CV aims to please many. CVs are usually funded by the company board, and the board rarely consists of likeminded people with likeminded agendas. Yet having most of these people “on board” is crucial to launching the venture. This is where the term “whipping votes” comes in. The venture’s lead intrapreneur often meets with board members individually to convince them to back the venture. Although this resembles the way a startup scouts for funding, a company board will end up around one table to ponder and make a group decision. The support of each individual is crucial for the development of the venture.

By now you might have concluded that both entities are quite distinctive, but in the end, they are also very much alike. Corporate ventures are predominantly better equipped, with higher odds of success, but these assets will go to waste if you don’t stay close to the startup approach.

Now that you know the difference, it’s time to realise its advantage for your corporate by exploring new growth areas.

Smoke Tests enable you to get all the answers you need at a fraction of the cost. 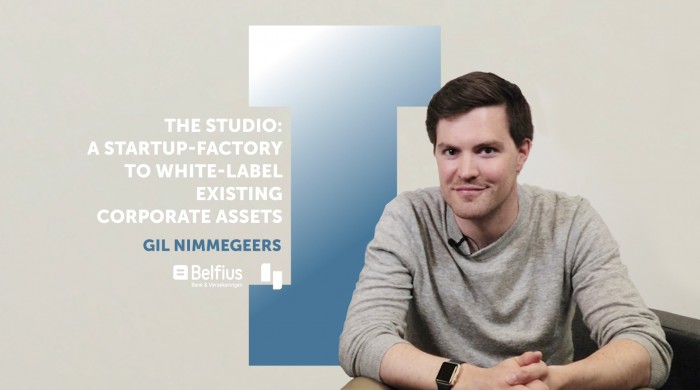 As one of Belgium’s biggest banks, Belfius has developed assets that facilitate internal processes and improve their services and connection to clients.